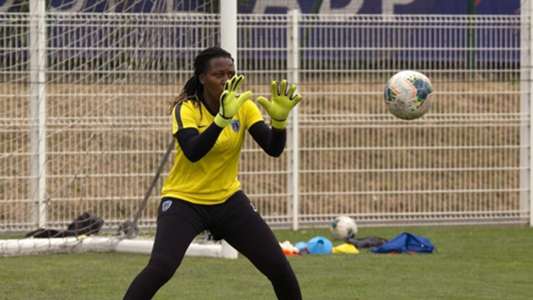 Chiamaka Nnadozie finally made her debut in the French D1 Arkema as Paris defeated Issy 5-0 on Saturday.

Following a record-breaking display at the Women’s World Cup last year, the Nigeria international joined the French top-flight outfit on an 18-month deal from Nigerian side Rivers Angels in January.

Since she arrived at the Stade Robert Bobin outfit, the 19-year-old had waited for her competitive debut after a fantastic pre-season outing.

However, her wait came to an end as coach Sandrine Soubeyrand handed her a place in the starting XI ahead of first-choice Natascha Honegger at home against Issy on Saturday.

Following a recent 2-1 defeat at Montpellier, the Nigerian was eager to inspire her side’s return to winning ways against the visitors.

The hosts made a strong start to the match as Mateo fired home a rebound after goalkeeper Pauline Moitrel denied Evelyne Viens’ effort off Julie Soyer’s cross from the right in the fifth minute.

A minute from the half time break, Viens doubled the lead from another rebound after the crossbar denied Mateo’s attempt.

After the break, Gaetane Thiney sent in a fine cross from the right for Viens to bag her brace and the visitors’ third of the match with her header in the second half of the contest.

Six minutes later, Daphne Corboz provided a through ball from the left for Viens to tap in from 12 metres, becoming her hat-trick and Paris’ fourth.

On the brink of regulation time, Thiney gained her second assist of the day as she set up Linda Sallstrom from the right to wrap up the clinical victory for the home team.

Nnadozie lasted the duration of the match on her debut for Paris as her side claimed their second win of the season in style.

The win moved Paris to fifth spot in the French log with seven points from five games and they visit Fleury 91 for their next league outing on October 17.